The chemical attractant wafting from a female fruit fly shortened the lifespan of male flies when the femme fatale didn’t deliver on the signal’s promise. 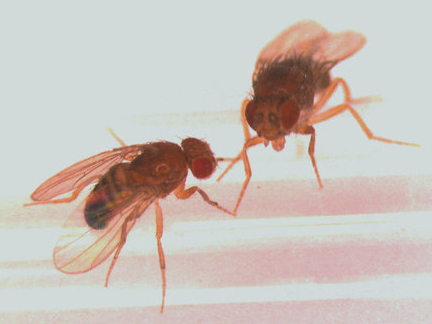 Fruit flies in the Pletcher lab at U-M. The female's pheromones will have significant effects on the male’s lifespan and health.

Can sexual frustration be bad for your health? Male fruit flies that expected sex – and didn’t get it – experienced serious health consequences and aged faster ANN ARBOR, Mich. — Sex may in fact be one of the secrets to good health, youth and a longer life – at least for fruit flies – suggests a new University of Michigan study that appears in the journal Science.

Male fruit flies that perceived sexual pheromones of their female counterparts – without the opportunity to mate – experienced more stress and rapid decreases in fat stores and resistance to starvation. The sexually frustrated flies lived shorter lives.

Mating, on the other hand, partially reversed the negative effects on health and aging.

“Fruit flies are model organisms for understanding molecular mechanisms of aging. These findings give us a better understanding about how sensory perception and physiological state may be integrated in the brain to affect long-term health and lifespan,” says senior author Scott D. Pletcher, Ph.D, professor in the Department of Molecular and Integrative Physiology at the U-M Medical School and research professor at the U-M Geriatrics Center.

“The cutting-edge genetics and neurobiology used in this research suggests to us that for fruit flies at least, it may not be a myth that sexual frustration is a health issue. Expecting sex without any sexual reward was detrimental to their health and cut their lives short.”

U-M scientists used sensory manipulations to give the common male fruit fly, Drosophila melanogaster, the perception that they were in a sexually rich environment by exposing them to genetically engineered males that produced female pheromones. They were also able to manipulate the specific neurons responsible for pheromone perception as well as parts of the brain linked to sexual reward (secreting a group of compounds associated with anxiety and sex drive).

“These data may provide the first direct evidence that aging and physiology are influenced by how the brain processes expectations and rewards,” Pletcher says. “In this case, sexual rewards specifically promoted healthy aging.”

Fruit flies have been a powerful tool for studying aging because they live on average 60 days yet many of the discoveries in flies have proven effective in longer-lived animals, such as mice.

For decades, one of the most powerful ways to slow aging in different species was by limiting their food intake. In a previous study, Pletcher and his colleagues found that the smell of food alone was enough to speed up aging, offering new context for how dietary restriction works.

OMGYes - The science of pleasure

Sex is not a natural act, and good lovemaking is an art that must be learned and practiced.