What Texting Does to the Spine 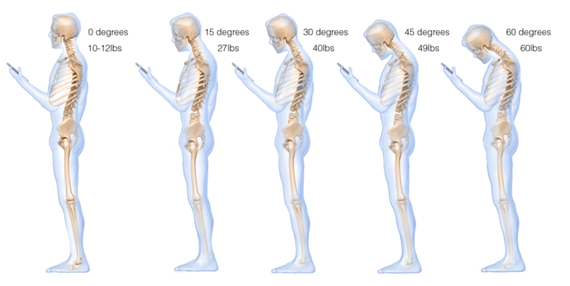 A new study suggests that looking down at a cell phone is the equivalent of placing a 60-pound weight on one's neck.

Americans spend about an hour on their smartphones each day. Unless you train yourself to stare straight ahead into your iPhone screen, you could be continually stressing your spine. These stresses may lead to early wear, tear, degeneration, and possibly surgeries.

Talking While Walking: Another Traffic Hazard?

Those behind the wheel may not be the only ones at risk of a cell phone-related auto accident. So suggests a study published in January in the journal Pediatrics that shows that children are more distracted while crossing the street if they happen to be talking on a cell phone.

Using a virtual reality setting, researchers studied 77 children ages 10 and 11 to see what effect cell phone conversations had on their ability to make it across the street safety.

What they found was that when children were on the cell phones, their attention to traffic -- the number of times a participant looked right or left -- went down 20 percent. The risk of getting hit by a car, or the number of close calls, went up 43 percent.

Some preliminary studies show that even adult pedestrians get distracted while carrying on cell phone conversations while walking.

Texting Takes a Toll on Thumbs

When it comes to the possible downsides of mobile device use, the side effects are not all in our heads. Our thumbs, it turns out, may also bear the brunt of our reliance on these devices.

They are really repetitive stress injuries -- pain, numbness, discomfort in the base of the thumbs from overuse. These sorts of injuries, known as repetitive strain injuries or a repetitive motion disorders, are sometimes minor. But they can also lead to serious medical problems.

New research released in 2009 suggests that one cell phone-related health threat that many people face may not be from their own phones at all -- but from their doctors' mobile devices. In a study published in the journal Annals of Clinical Microbiology, researchers at Ondokuz Mayis University in Samsun, Turkey screened the mobile phones of 200 health care workers in hospitals for germs that are known to be dangerous to human health.

Many cell phone users report feeling vibrations when their phones are, in fact, silent.

"If you use your cell phone a lot, it becomes part of you," Dr. William Barr, the chief of neuropsychology at the New York University School of Medicine, told ABCNews.com. "It's like wearing a tight sock all day. When you take it off, you still feel it there on your foot. If your cell phone is not there, you still feel like it is."

Our reliance on our cell phones may actually be "training" some of us to believe it is vibrating when it is not. In the case of cell phones, people are rewarded when they pick up their calls and read their incoming text messages, which causes them to pick up their cell phones more and more frequently.

"People are rewarded when they are able to detect low amplitude vibrations so they get better and better at responding," said Jon Kaas, a professor of psychiatry at Vanderbilt University. "It is very rewarding to get the message, so people are able to train their system to detect that signal."

As people repeat this behavior over and over again, connections between nerves in their brain become stronger and new ones are formed, which helps to make the behavior automatic.

And sometimes, as is the case with vibrating cell phones, the behavior becomes too automatic. "People have gotten so good at detecting vibrations that they start responding to false positives -- they think something is there when it is not," Kaas said.